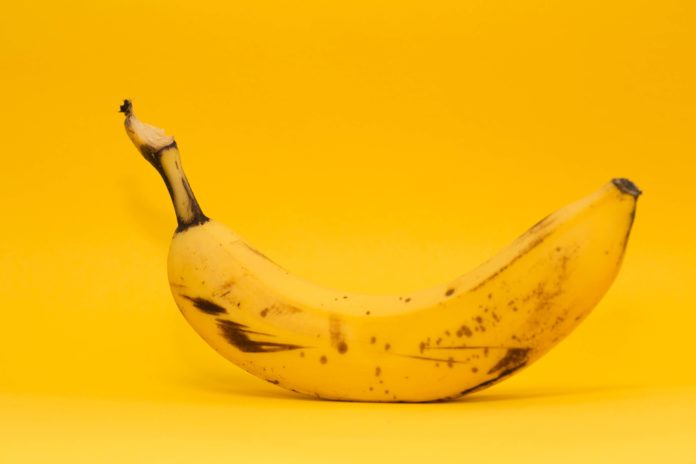 Bananas are curvy because they are negatively geotropic and the fruit curves upward in search of sunlight. Let’s understand it better.

Banana is the 5th highest consumed food in the United States

Banana is a fun fruit: it comes in vibrant colors, yellow and green in most countries, with some variants in different shades of orange and even red.

More importantly, banana is a great source of nutrients, from starches that are useful for fuel to potassium, magnesium and other vitamins.

Bananas are an excellent source of fuel because they are made up of easily digestible starches. Once eaten, the starch is metabolized into glucose which the body uses for energy. This natural, quick energy boost is the reason why bananas are a popular breakfast fruit.

In fact, the banana is the 5th highest consumed food in the United States, after burgers, hotdogs, among others.

Bananas are known for being one of the most versatile fruits in the market. They can be eaten raw, fried, broiled, boiled, blended and even candied.

There are so many things you can do with a banana that’s it’s easy to see why they’re sold in every market or store in the world.

Bananas are also easily recognizable due to their unique shape. Most bananas sold in markets and convenience stores sport a curved shape. While it is not uncommon to see a banana that is just slightly bent, most bananas curve inward. Here’s the reason why.

Bananas: From Flower to Fruit

Dole, a food company that leads the world in banana growing and distribution, has an explanation of why bananas are curved.

Bananas start life as banana buds growing out of the pseudostem – the strong, middle trunk of a banana tree. The buds grow to become flowers, which look like big, red cones hanging upside down a long, knobby fleshy stalk. These cones are actually petals that enclose the banana fruits which initially look like slender, yellow flowers.

As the fruit grows, it elongates and changes from bright yellow to green. As the bananas elongate they begin to take the shape and form of young bananas, albeit slender, resembling rectangular fingers jutting out in rows from the stalk.

During this time, the fruits go through a process of negative geotropism. Geotropism is the growth of plants with respect to gravity.

Banana fruits hang downward, which means that the bottom of the fruit is higher than the top, which is nearer to the ground.

As bananas grow, the fruits start to become heavy and begin sinking towards the ground.

However, fruits naturally seek the sun which means that as they mature, they start to curve upward in search of the sun’s rays.

This is because bananas contain a chemical called auxin, a plant hormone that affects how the plant responds to sunlight.

This creates a curved shape as the banana is effectively folding against itself in search of the sun.

The upward growth is also believed to be an adaptive mechanism of early banana plants, which originated in the rainforest.

In rainforests, sunlight is present in narrow slivers that penetrate through dense vegetation.

Other plants naturally grew sideways in search of sunlight peering through rainforest foliage, but this would not have worked for bananas which were heavy.

Sideways growth would have obviously caused the plant to overbalance and topple over.

Instead, the bananas bend and curve upward to avoid destabilizing the plant in its search for sunlight.

Another reason why it’s so common to see curvy bananas in your local store is selective cultivation.

Many plantation owners started using auxin herbicides to maximize the response of the bananas to sunlight, producing curvy, visually-appealing fruits.

This appearance is wildly different from the original banana, which was a stocky, greenish pulpy fruit with large seeds.

The fruit was domesticated in South Asia and New Guinea before the banana found its way to Europe in CE 300.

By the 1800s, the banana had been selectively bred to be long and curvy, pretty much looking like the banana we eat today.

More selective growing happened in the 1900s when banana plantations were incorporated into large cultivation and distribution companies like Chiquita and Dole, which favored the cultivation of bananas that looked and tasted alike and were genetically resistant to disease.

So, can you find any straight bananas?

Yes! There are over 1000 varieties of bananas with different colors, sizes, and shapes.

In nature, organic bananas are often green or brown, short and chunky with very little to no curves in them.

The reason why when we think of bananas, what comes to mind is an elongated, yellow fruit that is curved just right is that we usually see this variant of banana in our stores.

This is true for Cavendish bananas. Cavendish bananas are easy to grow and harvest. They are often harvested green and allowed to ripen en route to commercial stores, where they arrive sweet, yellow and ready to be sold.

Cavendish bananas are often large and long, so they naturally produce an even bend that looks very appealing once ripe.

Ladyfingers, on the other hand, grow short and straight, with most growing an average of 5 inches in length.

Organic bananas which are often short and stocky are harder to find because they can be costly and difficult to transport.

However, straight and stocky bananas are natural and can be easily found in organic banana plantations or even growing in the wild.

To summarize, bananas are curvy because they are negatively geotropic and the fruit curves upward in search of sunlight.

However, bananas come in different variants, shapes, flavors, and sizes.

This means that aside from long, curved sweet bananas you can also see short, stocky, starchy and savory kinds, depending on where you shop or where you are in the world. 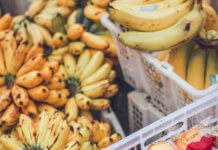 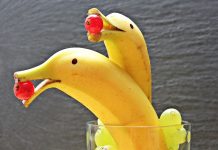 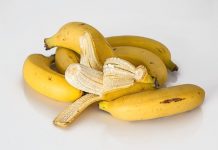 The Drunk Banana: Your Guide to the Yummiest DIY Banana Drinks

ABOUT ME
Went Bananas! is your...banana website. We provide you with all relevant information about bananas: nutrition facts, types, uses, recipies, products related, pictures, and so much more.
Contact us
© Copyright 2021 - Went Bananas!